Mobbing with an Audience

I've run some hundreds of mob programming and testing sessions with new groups for purposes of conference talks and trainings, and while I prefer setting up a full day session so that I can mob with the whole group of 25 people, sometimes I end up splitting the group for demo purposes. I was writing about this for the new version of Mob Programming Guidebook, and thought it might make useful content just as a blog post.

Mob programming with an audience is a special setup that is useful tool especially to someone teaching mob programming, teaching any skills in software development in a hands-on style making new kinds of sessions available for conferences, or generally running demo sessions with partial session participant involvement. As a conference speaker and a trainer, a lot of our mob programming experience comes from facilitating mob programming sessions with various groups. For a training, we usually set up the whole group into a mob where everyone rotates. For conference sessions where time constraints limit participant numbers for effective mobbing, we use mobbing with an audience.

For mobbing with an audience, you split the room to two groups:
For the mob, you will set up a basic mob setup in the front of the room with chairs for each person, whiteboard furthest away from the computer to ensure speaking volume for the designated navigator through the physical setup. 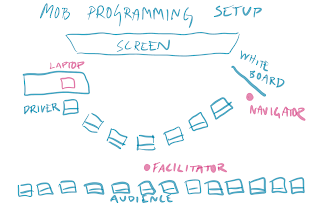 For this setup, you will need a room with chairs that are freely moving. Make sure text on the screen is big enough not only for the mob to see, but the audience to follow as well.

TIPS FOR THE FACILITATOR

As we have run some hundreds of sessions with various groups in this format, we have had things go wrong in many ways.