Blood on the Terrace

On a Finnish summer evening, a group of friends got together on a summer cottage. They enjoyed their time and each other's company, with a few drinks. But as things unfold in unexpected ways, all things coming together,  one of them decided it was a good idea to play with a hammer. End result: hammer hitting a foot, lot of blood flowing to the terrace.
The other person on the terrace quickly assessed the situation, with a feeling of panic summing it simply: blood on the terrace. And what do you do when you have blood on the terrace? You go and get a bucket and a rag to clean it up. After all, you will have to do this. Blood on the terrace could ruin the terrace! All of this, while the friend in need of patching, was still in need of patching, bleeding on the terrace. "Hey, go get Anna", coming from the person bleeding on the terrace corrected the action and the incident became a funny story to recount to people.
I could not stop laughing as my sister just told me this story of something she did. It was a misplaced reaction made under sense of helplessness and panic. How something that was necessary to do, but was not necessary to do right there and then turned out a funny story of how people behave. I'm telling this here with her permission and for a reason.
Misplaced reactions are common when we build software. Some of the worse reactions happen when we feel afraid, panicking and out of control. When we don't know what is the right thing to do and how to figure that out in a moment. And we choose to do something, because something is better than nothing.
You might recognize this situation: a bug report telling you to hide a wrong text. You could do what the report says and hide the text. Or, you could stop to think why that text is there, why it should not be there and why it being there is a problem in the first place. If you did more than what the immediate ask was, you would probably be better off. Don't patch symptom by symptom, but rather understand the symptoms and fix the cause.
While a lot of times the metaphor we use is adding bandaids, blood on the terrace describes the problem we face better. It is not that we are just doing something that really isn't addressing the problem in its full scale. It is that we are, under pressure with limited knowledge, making rash judgements out of all the things we could be doing, and timing the right action to the wrong time.
When you feel rushed, you do what you do when time is of essence: something RIGHT NOW. What would it take to approach a report you get as your first step being to really pay attention and understand what the problem is, why it is a problem and if whoever told you it was a problem was a definitive source. Or if that matters.
It was great that the terrace did not end up ruined. The foot healed too. All levels of damage controlled.
Posted by Maaret Pyhäjärvi at 4:49 PM

Exploratory Testing. The wonderful transformation machinery that takes in someone skilled and multidisciplinary and time, crunches whatever activities necessary and provides an output of someone more skilled, whatever documentation and numbers we need and information about testing.

What happens in the machinery can be building tools and scripts, it can be operating and observing the system under test but whatever it is, it is chosen under the principle of opportunity cost and focused on learning.

Note taking produces:
Reporting produces something that says what quality is, what coverage is, how long what we say now stays true, and what we recommend we would do about that.

Automation can take notes, count the passes and fails, summarize use of time. The application under test takes notes (we call  that logging) and it can be a central source of information on what happened.

When automation does reporting, that usually summarizes numbers. I find our managers care very little for these numbers. Instead, the reporting they seek is releases and their contents.

When automation does log of test case execution, we can call that a report. But it is a report in scope very different than what I mean by a report from exploratory testing - including automation.
Posted by Maaret Pyhäjärvi at 9:24 PM

It does what it is supposed to do, but is this all we get?

Yesterday in a testing workshop I run 3rd time in this format online, something interesting happened. I noticed a pattern, and I am indebted to the women who made it so evident I could not escape the insight.

We tested two pieces of software, to have an experience on testing that enabled us to discuss what testing is, why it is important and if it interests us. On my part, the interest is evident, perhaps even infectious. The 30 women participating were people from the Finnish MimmitKoodaa program, introducing women new to creating software to the skills in that space.

The first software we tested was the infamous Park Calculator. The insight that I picked up on came quite late to a bubbling discussion on how many problems and what kind of problems we were seeing, when someone framed it as a question: Why would the calculator first ask the type of parking and then give the cost of it, when a user would usually start with the idea that they know when they are traveling, and would benefit from a summary of all types of parking for that timeframe? The answer seems to be that both approaches would fit some way of thinking around the requirements, and what we have was the way who ever implemented this decided to frame that requirement. We found a bug, that would lead to a redesign of what we had, even if we could reuse many of the components. Such feedback would be more welcome early on, but if not early, discussing this to be aware was still a good option.

The second software we tested was the GildedRose. A piece of code, intertwined with lovely clear requirements, often used as a way of showing how a programmer can get code under tests without even reading the requirements. Reading the requirements leads us to a different, interesting path though. One of the requirements states that quality of an item can never be negative and another one tells it is maximum 50. Given a list of requirements where these two are somewhere in the middle, the likelihood of a tester picking these up to test first is very high - a fascinating pattern in itself. However, what we learn from those is that there is no error message on an input or output beyond the boundaries as we expect, instead given inputs outside boundaries the software stays on the level of wrongness of input not making it worse, and given inputs barely at boundaries it blocks the outputs from changing to wrong. This fits the requirement, but goes as a confusing design choice.

The two examples together bring out a common pattern we see in testing: sometimes what we have is what we intended to have, and fits our requirements. However, we can easily imagine a better way of interpreting that requirement, and would start a discussion on this as a bug we know will stretch some folks ideas of what a bug is.

With both of our test targets yesterday, we identified a bug where it fits a requirement but the requirement was not up to par what users would want. You get what you ask for, not what you could ask for if you understood how software works.
— Maaret Pyhäjärvi (@maaretp) April 9, 2020

Posted by Maaret Pyhäjärvi at 9:40 PM

The way we have been working for the last years can best be described as a developer-centric way of working.

Where other people draw processes as filters from customer idea to the development machinery, the way I illustrate our process is like I have always illustrated exploratory testing - putting the main actor in the center. With the main actor, good things either become reality or they fail doing so. 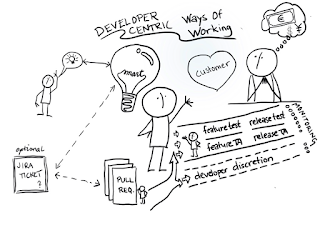 In the center of software development is two people:
Without code, the software isn't providing value. Without good ideas of value, we are likely to miss the mark for the customer.

Even with developers in the center, they are not alone. There's other developers, and other roles: testers, ux, managers, sales, support, just to mention a few. But with the developer, the idea either gets turned into code and moved through a release machinery (also code), and only through making changes to what we already have something new can be done with our software.

As I describe our way of working, I often focus on the idea of having no product owner. We have product experts and specialists crunching through data of a versatile customer base, but given those numbers, the product owner isn't deciding what is the next feature to implement. The data drives the team to make those decisions. At Brewing Agile -conference, I realized there was another way of modeling our approach that would benefit people trying to understand what we do and how we get it done: flight levels.

Flight levels is an idea that when describing our (agile) process, we need to address it from three perspectives:
As I say "no product owner", I have previously explained all of this dynamic in the level of the team doing the work, leaving out the two other levels. But I have come to realize that the two other levels are perhaps more insightful than the first.

For getting work coordinated, we build a network from every single team member to other people in the organization. When I recognize a colleague is often transmitting messages from another development team in test automation, I recognize they fill that hole and I serve my team focusing on another connection. We share what connections give us, and I think of this as "going fishing and bringing the fish home". The fluency and trust in not having to be part of all conversations but tapping into a distributed conversation model is the engine that enables a lot of what we achieve.

For leading the business, we listen to our company high level management and our business metrics, comparing to telemetry we can create from the product. Even if the mechanism is more of broadcast and verify, than co-create, we seem to think of the management as a group serving an important purpose of guiding the frame in which we all work for a shared goal. This third level is like connecting networks serving different purposes.

The three levels in place, implicitly, enabled us to be more successful than others around us. Not just the sense of ownership and excellence of skills, but the system that supports it and is quite different from what you might usually expect to see.
Posted by Maaret Pyhäjärvi at 9:53 PM