But at least I want to reach out to ask for you to make my job of helping you easier. Keep me posted on what you're doing and thinking, and I can help you crystallize what threats there might be to the value you're providing and find ways to work with you to have the information available when it is the most useful. What I do isn't magic (just as what you do isn't magic) but it's different. I'm happy to show you how I think well around a software system whenever you want to. Let's pair, just give me a hint and I make the time for you.

You've probably heard of unit tests, and you know how to get your own hands on the software you've just generated. You tested it yourself, you say. So why should you care about a second pair of eyes?

You might think of testing as confirming what ever you think you already know. But there's other information too: there are things you think you knew but were wrong. And there are things you just did not know to know, and spending time with what you've implemented will reveal that information. It could be revealed to you too, but having someone else there, a second pair of eyes, widens the perspectives available to you and can make the two of you together more productive.

Us tester tend to have this skill of hearing the software speak to us, and hinting on problems. We are also often equipped with an analytic mind to identify things you can change that might make a difference, and a patience to try various angles to seeing if things are as they should be.  We focus our energies a little differently. 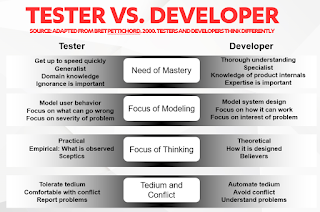 When the software works and provides the value it is supposed to, you will be praised. And when it doesn't work, you'll be the one working late nights and stressing on  the fixes. Let us help you get to praise and avoid the stress of long nights.

You'll rather know and prepare. That's what we're here for. To help you consider perspectives that are hard to keep track of when you're focused on getting the implementation right.

Thank you for being awesome. And being more awesome together with me.

Maaret - a tester
Posted by Maaret Pyhäjärvi at 12:33 PM

My desk is covered with post-it notes of things that I'm processing, and today, I seem to have taken a liking to doodling pictures of little bombs. My artistic talent did not allow me to post one here, but just speaking about it lets you know what I think of. I think of things that could be considered time bombs in our products, and ways to better speak of them.

There's one easy and obvious category of time bombs while working in a security company, and that is vulnerabilities. These typically have a few different parts in their life. There's the time when no one knows of them (that we know of). Then there's the time when we know of them but other don't (that we know of). Then there's the time when someone other than us knows of them and we know they know. When that time arrives, it really no longer matters much if we knew before or not, but fixing commences, stopping everything else. And there's times when we know, and let others know as there is an external mitigation / monitoring that people could do to keep themselves safe. We work hard to fix things we know of, before others know of them because working without an external schedule pressure is just so much nicer. And it is really the right  thing to do. The right thing isn't always easy and I love the intensity of analysis and discussions vulnerability related information causes here. It reminds me of the other places where the vulnerabilities were time bombs we just closed eyes on, and even publishing them wouldn't make assessing them a priority without a customer escalation.

Security issues, however, are not the only time bombs we have. Other relevant bugs are the same too. And with other relevant bugs, the question of timing sometimes becomes harder. For things that are just as easy to fix while in production and while developing an increment, timing can become irrelevant. This is what a lot of the continuous deployment approaches rely on - fast fixing. Some of these bugs though, when found have already caused a significant damage. Half of a database is corrupted. Communication between client and server has become irrecoverable. Computer fails to start unless you know how to go in through bios and hack registries so that starting up is again possible. So bugs with impacts other than inconvenience are ones that can bring a business down or slow it to a halt.

There's also the time bombs of bugs that are just hard to fix. At some point, someone gets annoyed enough with a slow website, and you've known for years it's a major architectural change to fix that one.

A thing that seems common with time bombs is that they are missing good conversations. The good conversations tends to lead to the right direction on deciding which ones we really need to invest on, right now. And for those not now, what is the time for them?

And all of this after we've done all we can to avoid having any in the first place.

Posted by Maaret Pyhäjärvi at 10:51 AM

It's not all fun and happy though. I really don't like the fact that yet again, the feedback that I'm delivering happens later than it could. Then again, as per ability, interest and knowledge to react to it, it feels very timely.

There's three main things on the "life of this feature". First it was programmed (and unit tested, and tested extensively by the developer). Then some system test automation was added to it. I'm involved in the third part of its life, exploring it to find out what it is and should be from another perspective.

As first and second parts were done, people were quick to communicate it was "done". And if the system test automation was more extensive than it is, it could actually be done. But it isn't.

The third part has revealed functionalities we seem to have but don't. Some we forgot to implement, as there was still an open question regarding them. It has revealed inconsistencies and dependencies. And in particular, it has revealed cases where the software as we implemented isn't just complicated enough for the problem it is supposed to be helping with.

I appreciate how openly people welcome the feedback, and how actively things get changed as the feedback emerges. But all of this still leaves me a little grumpy on how hard communication can be.

And we won't be done before we've addressed also the work we just can't plan for.
Posted by Maaret Pyhäjärvi at 12:55 PM