Exploratory Testing is 35 years this year. I've celebrated this by organizing two peer conferences to discuss what it is today and my summary is that it is:


Cem Kaner described it 12 years ago this way: 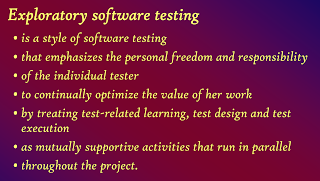 The core of what I pick up from this is emphasis on individual tester without separation of cognitive sequence, optimizing value through opportunity cost awareness and learning supporting test design and execution throughout the work being done.

I dropped words like project (because in my world of agile continuous delivery, they don't exist), and added words like opportunity cost to emphasize the continuous choice of time on something being time away from something else. I also brought in the concept of cognitive load separation as the idea is to not separate work into roles but build skills and knowledge in the people through doing the work.

Cem's notes are available in the presentation, and I wanted to summarize them here. He identified four areas to describe from his circles:

Previous areas of agreement are not that anymore.
Some folks have decided that Exploratory Testing is deprecated.
Other folks are rediscovering Exploratory Testing as the smart way of testing that was relevant 35 years ago that is different today when automation is part of how we explore rather than a separate technique.

We still agree that it is an approach not a technique, just not if it is necessary separation. Wasteful practices of testing both with and without automation are still popular, and it is a cost-aware approach to casting nets to identify quality-related information.

Previous areas of controversy are old lessons and not particularly controversial. Some of them (like certifications) describe a divided industry that no longer gets the same attention. Most of what was controversial 12 years ago, is now part of defining the approach.

Areas of progress seem far from done from today's perspective. Quicktests give less value with emergence of automation. Oracles have been a focus of Cem Kaner's teaching for a decade after the previous summary and are working to understand them in respect to automation being closely intertwined in our testing. Paired work of testing was a whim of a moment as focus of really understanding the cognitive side of it but in addition to paired work, we now have mob testing - work in a group.

Concerns are still concerns except for tracking and reporting status. With automation integrated into exploratory testing and continuous delivery, status is not a problem but industry is further divided to those in the fast paced deliveries and those who are not.

What do we agree on, what are the controversies, what progress can we hope we are still making and what concerns we have at 35 years of exploratory testing?

Posted by Maaret Pyhäjärvi at 9:39 PM