A Good Week for Exploratory Testing


Exploratory Testing is a 35-year-old approach to testing, created back in its days to describe a style of testing common in Silicon Valley companies that was clearly different from what we saw as mainstream.

In the 35 years of Exploratory Testing, we've grown to understand it better.

We now understand that the core of exploratory testing is the degree to which learning from the test we do now impacts our choice of what we do next.


We understood clearly that the old and traditional way of testing where people design and document tests to be later executed effectively is not what we would call exploratory testing. Exploratory testing is something else.

Where we still struggle is understanding the relationship of test automation and exploratory testing.

This was a good week for exploratory testing, because someone many of us follow raised it up by writing about it.

Fowler describes it as:
Sounds like how great test automation is created! But this is exploratory testing? YES!


Even the best automated testing is inherently scripted testing - and that alone is not good enough. 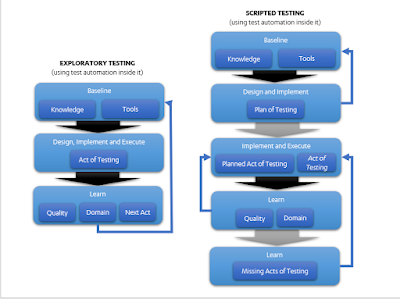 In testing, we start with a baseline of knowledge and tools. I start my day with a very different baseline that someone new to my organization. Where exploratory and scripted approaches differ is in where our feedback loops are, and what learning is welcomed. Scripted approach learns about testing in the end, rather than continuously.

Posted by Maaret Pyhäjärvi at 5:56 PM