Reflections on a Cadence

When last year was ending, I remember the distinct feeling of now wanting to move as I had before with my end of year reflections. Instead of looking back on yet another year, I wanted to look forward. So instead of writing a summarizing blog post, I thought about what I might want to find my balance on, and came up with this. 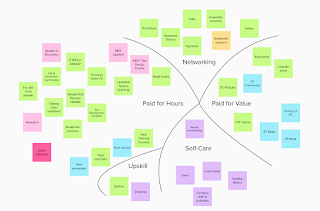 I identified five areas of focus to seek balance: paid for hours, paid for value, networking, up skill and self-care. I did many of the things, but some of the things I had plans for turned out less successful.

This totals my talks to 474 since I started public speaking in 2001, and my blog posts to 784 with total of 783,567 page views and my twitter follower number to 7835. That means two years has added me 152 560 page views on my blog and 2173 followers on my twitter. With my blog and twitter being more of public notetaking than writing to an audience, I still find it amazing that some people find value in what I write on.
Overall, the year at work was amazing. Did good stuff with good people.
Instead of reflecting on all of this and feeling overwhelmed, I want to write down some of my failures.
Every year I learn about what I can do and can't do. I make choices on accepting some, and changing some. I get many things right, and many things wrong. But I total on the positive.
Because I don't have to go to office, I have more time in my hands. I'm healthier on old dimensions, since I have always been allergic to people with animals, and there's plenty of those at the office. I'm still connected with people who matter to me, and physical location isn't what determines my best connections outside my immediate family.
We built something relevant at work, and I leave things better than they were when I found them. My new place finds use for me, and has lovely group of people, and all this leaving and joining fits the storyline we've built for me. I'm happy that I dare to try things that don't always work out, and step out when that is the right thing to do.
Doing many small things continuously gets you through a lot. So while I can't explain it all of work here, I will get to reflect that - on a cadence - next.
Posted by Maaret Pyhäjärvi at 11:59 PM