Outing a Skeleton to Reclaim Control

When I told a friend I had allowed a boyfriend to take nude images of me, they were visibly worried. They recounted stories of how it had turned bad, and I brushed it off without paying attention. I was an adult, in a committed consensual relationship that involved him traveling a lot. I took the chance to make someone I really cared for happy. And he was happy.

He enforced more images and texts by being happy. By making me feel he appreciated me writing sex stories of our time together. But he also enforced this by messages of how hard being monogamous was for him, how important it was that he would be getting what he needed. And I did my share, writing over 50 stories.

As years passed, we grew apart, and I could no longer cope with the way he left me feeling: blackmailed, on the edge of receiving a call in the middle of the night of "following his heart". When I finally got that call I was afraid of all these years, I realized my fear had become a self-fulfilling prophecy. His heart had found someone new, and I was free of the nagging feeling this would happen one day. Like so many others, I realized we were never right for each other - our values were different.

With the change of status, the materials I had created for in-relationship entertainment became an issue. I asked him to delete it. He refused. I asked again, over and over. He refused.

For a few hours, I asked twitter until a friend contacted me to take the tweet down. She said it was hurting my professional image. It wasn't helping, my ex was not budging on the deletion. Like he said on his worst quality: "I'm right, a lot". He wasn't but he would remain stubborn. 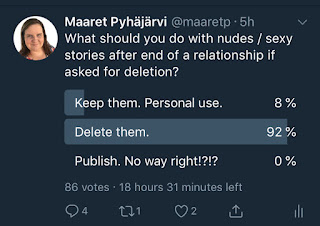 For a month and a half, I have been trying to convince him without success. Instead, I've successfully turned the feeling of powerlessness into nightmares. With long consideration, I'm outing this skeleton in attempt to reclaim control.

UPDATE Oct-10th: Llewellyn confirmed he has deleted the materials. Thanks for support everyone.

When I talk to someone like me, like my friends talked to me years ago I have a personal experience to share on why you should *never* create material like this. Love fades. And that kind of material, intended for the relationship, may not be part of the contract to clear when the relationship ends.

Posted by Maaret Pyhäjärvi at 8:38 PM