We've been doing these learning sessions with Mob Programming. We've worked on refactoring, Selenium Webdriver tests on our application, on our unit tests and now on replacing an old component / technology with new. On the last, we spent a full day working as a mob, while the others have been 2 hours of practice on production code.

I'm finding it interesting to see how the group's dynamic changes depending on what type of task we're working on. When we work with something relatively simple (like the first two sessions), our problems of working as a group emerge easily. The driver will not wait for navigators to tell what to do but wants to "show off" or "just get this done quickly". The navigators step away from navigating, leaving it all to two vocal people, so it starts to look more like pair programming with the rest of people watching. From the first two sessions, we agreed to the third we'd go a step back from mob programming (driver - navigators) to Randori (driver - designated navigator - other navigators).

The third session task was completely different. This time, none of us in the mob could actually have done the task all by themselves, so the experience showed a lot more of the idea of bringing the best of everyone into the task. Our task was to replace in one dialog an old grid component with a new Kendo grid. It was the first place in the program where we had to work with subgrids and this brought in the fact that none had knowledge on how exactly that should be done. There were none of our own application examples to look for help.

With this task, Randori did not make sense. Having someone navigate who has no clue of what we're doing, isn't going to help with the navigation skills practice - for that we need something more shared. So we went for group navigation. And it worked much better than before. Partly because one of the developers opted out of the session and complaining about 7 people looking while 1 is working did not interrupt us. Partly because the task at hand required a group to be done effectively. And learning (through retrospecting) could also have it's share in doing better - trying, failing and talking about it probably changes the situation.

We worked as planned for 2 hours before lunch, but as we were not done with the task completely (someone told it was a week of work, no wonder we couldn't do it in two hours...) we discussed how to continue. With my gentle push, I knew that at least two developers would pair up on continuing on it for learning purposes, and the invite to join to mob was open. While there was a mob of 7 in the morning, there was a mob of 4 in the afternoon. The devs invited me into the rotation also in the afternoon.

There were all sorts of events and thoughts I noted during the day:

I had moments where I would think I'd rather be doing anything else but spend my day with the code. But I loved the social aspect of it, being with my team, having a team instead of people who talk to me once a week and when I initiate a question. And I loved how proud I felt about the people I work with and their skills, abilities and attitudes. We play well together.

It felt appropriate this day of mobbing was the same day when Llewellyn Falco created his little infographic on putting a group of people together. That really sums up how it is: getting the best out of us all. Some of my best is still in front of us, when we actually explore the feature we're creating. 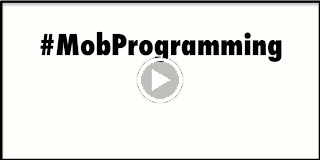 Posted by Maaret Pyhäjärvi at 10:45 AM