What makes a test automation expert?

I was part of a working group that created an article called 125 Awesome Testers You Should Keep Your Eye on Always. It may not be obvious, but that list is a response to another article called 51 automated testing Experts You Should Keep Your Eye on Always. That list had only four women (at least it had four women!) and let me tell you a big public secret:


It is not because there aren't many awesome women in automation. It is because people don't look around and pay attention.

We can be awesome at automation in so many ways. Writing code alone in a corner is not the only way. Many of us work in teams that collaborate: pair, or even mob. Coding is not the only way to do automation.
We don't say coding is all there is to application development, why would coding be all there is to  test automation development?
There's been a particular experience that has shaped my experience around this a lot, which is working with mob programming.  After programming with 14 different programming languages, I still identified as a non-programmer because my interests were wider. I actively forgot the experience I had, and downplayed it for decades. What changes me was seeing people who are programmers in action. I did not change because I started coding more. I changed because I started seeing that everyone codes so little.

The image below is from a presentation of Anssi Lehtelä, a fellow tester in Finland who has also now two years of mob programming with his team under his belt. A core insight I find we share is that in coding, there is surprisingly little of coding. It's thinking and discussions. And that's what we've always been great at too! And don't forget googling - they google like crazy! 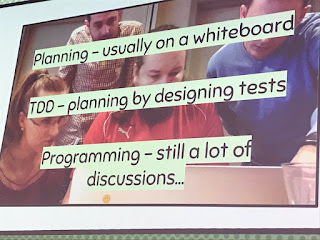 Lists tell you who the list maker follows. Check if you have even a possibility to recognize the awesome women in automation using http://proporti.onl on your twitter feed. It can be brutal. Mine is 53 % women. In the numbers I can follow, there's easily a brilliant, inspirational woman to match every single man. In any topic, including automation. Start hearing more voices.

Posted by Maaret Pyhäjärvi at 6:22 PM