I'm a big fan of reflection cadence, and it's time for one of those moments dedicated to acknowledging, primarily to myself, what I've made out of yet another year.

Changing the World of Conferences

February 2016 I introduced this tagline while opening the inaugural European Testing Conference. ETC is a platform for change.

We're changing from testers  to testing and bringing together testers and programmers to talk about ways they do testing, with practical, cross-discipline perspective.

We're changing competing for speaking slot based on a written description and reputation to oral explanation of your idea and experiences.

We're changing from thinking free entry is enough of compensation for speaking to paying speakers expenses and profit-sharing with the speakers.

We're changing from thinking of our conference to think of conferences in large.

Change of Focus in Full-Time Employment

Simultaneously, my speaking engagements changed from private time except for one week a year to work time. That is a big change, as with the amount of speaking I've been doing, I've worked very long days. This serves to remind you that not all companies see speaking as part of your work.

Now that my company allows me speak as part of my work, I also have a job that requires more of my attention naturally creating me the desire to not leave the office for speaking engagements. With the company slogan being 'Seeing things other's don't', I feel like a great match with my skills in exploratory testing in the realm of security software.

I tried cutting down my speaking in 2016 by not submitting to conferences. I ended up failing with my goal of cutting down though, as my long term-aspiration of being invited (to keynote in particular) started realizing.

I spoke a lot in conferences and meetups. For a year of trying to cut down my speaking, I failed. The numbers add up quickly as each talk I do internationally tends to get a local practice round.

In 2016, my stretch goal was to propose same topic for many conferences. In past years, I've considered it my signature that I speak of different topics always to surprise the few people traveling alongside me. I did not quite cut it down to having a real signature talk (still searching if there's a topic like that for me) but I narrowed down the amount of topics and practiced (to a personal stretch) delivering same talk multiple times to see if they grow that way.

I managed to do very little progress on my pair writing project on the Mob Programming Guidebook, as finding shared working time proved to be even more challenging when every sentence is written as strong-style pairing.

I wanted to wrote another book, one on Exploratory Testing encouraged by my great experience with LeanPub. Huib Schoots was kind to pass to me the book name on Leanpub (as he had reserved it), and now writing the book is my big 2017 goal. That, or passing the name again forward.

I wrote some more as in articles that could be part of my upcoming book. I'm very happy with my two articles with Ministry of Testing (who pays for articles, except I never invoiced for these).

And I blogged whenever I felt like I want to remember what I'm thinking later.

I met too many people to remember to appropriately appreciate them all. But I wanted to highlight a few that made a difference for me. 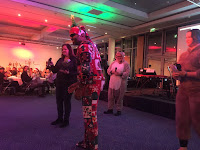 Posted by Maaret Pyhäjärvi at 10:25 PM