I spent my weekend in all-women Halloween Game Hackathon. For 2,5 days, close to 30 women got together for a coding event to form group with friends and strangers to build Halloween-themed games. The results are available on the event site.

This post is about my experience into all this. It's an experience colored by the fact that for 2,5 days, I was a developer.

When I created my name tag, this is what I said to talk to me about: 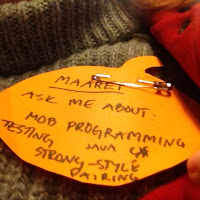 I actively avoided mentioning how little I enjoy programming in my every day work. I avoided talking lovingly about testing. I just did not actively volunteer info about what I do at work. I did not want to volunteer my labels. I wanted to be a developer amongst other developers. And that I did.

The organizers had placed us in teams based on our applications. Each team had a mix of experiences in programming. I did not know any of the three ladies I was assigned to work with, and was looking forward to it. Like I had written to my little name tag pumpkin, I was eager to work in mob format to really create together. It wasn't that easy though. The one of us that represented herself as the most experienced developer was strong on her opinions about what the game would be about (violence) and that she wouldn't want to work in a mob format. After deciding the basic directions on Friday evening, I was already preparing to just pay 30 euros (no-show fee) and leave - I would not be spending my weekend bossed around or left on the sidelines when there was such opportunities to learn from each other. Money was not the relevant investment - this cost me two nights away from my kids -time, as the days were long and they couldn't come home for the nights at all.

The never-before-programmer in my team encouraged me to not give up yet, but just go with it on Saturday morning. On mobbing I got back to the piece of advice I was given before: mob with the part of your team that wants to do that, and with that advice the three of us that were on site early on on Saturday went with mob programming, regardless of initial hesitation. I talked about how much more important it was to me that our never-before-programmer would feel she is an equal contributor in writing the code, than getting as much of it done as we could if learning for all of us wasn't the main goal. And the two ladies went with my request on "let's try it then" promise.

With 4 minute rotations on who was on the keyboard, we quickly picked the rhythm of just continuing where the previous driver left off. We used a javascript game engine that none of us had used before, and the mob format was particularly powerful in agreeing what we wanted to do and learning how that could be done. We solved our problems together, and the three of us owned every line of the code together.

There were moments that I was particularly delighted about as I find them insightful experiences:


It was a fun experience, that taught me a lot again. It gave me yet another perspective into how great mob programming is and how well it actually dwells into the problems of team formation without specifically targeting those.

The biggest takeaway for me was very personal: I learned I know a lot more on programming than I give myself credit for.
Posted by Maaret Pyhäjärvi at 6:46 PM