When you have friends with access to information and skills (or tools) you don't have, the smart thing  is to make us of them as long as they can make use of you too. The idea of a friend with a pick-up truck is a metaphor James Bach has introduced many times when talking about non-programming testers getting stuff done, that requires programming: befriend a programmer.

In November 2014, I blogged about a friend who changed my world at work in an hour, helping us get rid of estimates. Today I'm blogging about a friend who seems to be doing the same in a scale I couldn't hope for in a day or two.

About six months ago, I was starting to feel desperate at work. We had been putting an effort (as in developer time) into unit tests, I had spoken for them to make all the room they need for shaping up their skills through learning and I was at a point where everyone wanted to delete all unit tests instead of adding any more of them. I could guess, with all the discussions I've had with developers who do unit test a lot, that the problem is with skills, and just even getting in the right direction in what (and how) to do to practice while working. Since I was told our software "cannot be unit tested", the first step I went for was to see for myself if that would be true. With help and guidance from the friend, I managed to create a few tests, learn about Approval Tests -framework (realising how powerful concept the golden master is comparing to hand-crafting asserts was a major thing for me) and get just a little more convinced the problem was with skills.

I started working on a major area of printouts (it is the main result our product produces, and keeps causing me grey hair in coming up with ways it will break) and got stuck right away. The printouts is an area where I have a 34 point high-level checklist of things I need to remember to consider whenever it changes. I did not have the code knowledge of how our software was built and not the energy to dig into it by myself (I prefer taking help in these things...), so I quickly drew in one of the developers to show what to call. The three of us got forward a little, but got stuck on an excel problem: we could not generate two excels with same contents that would pass a diff, there was always a difference. With other work to focus on, we left the problem to rest for months.

This morning we finally revisited the problem. The friend agreed to show up at my office and work with us for a day, on getting us started with unit testing. I got together a small group of myself (the goal if this is still to teach _me_ unit testing, at least that is how I frame it), a developer familiar with the implementation and a summer intern working on unit testing.

The day ended up being split in retrospect to three very different, relevant parts.
The observations really sum up the different parts.

At the end of the day, my friend invited us to write down observations on post-it notes. The exercise reminded me again on how powerful it is to hear what others feel they learned, something we do way too little. There were items I wanted to share that I felt the others should notice. But more over, there were things others were noticing that I would have completely missed. 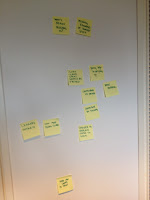 (sample of our notes)

From the discussion, I got the idea that just this day alone was probably the best thing I could do to make our unit testing efforts go forward. The main developer said he found ideas of things he could actually test, something he did not have prior to this day regardless of having spent significant amount of time browsing through the code trying to find those ideas. I saw us working in a more powerful way (as per results, we got more done in a day that we usually get in a week) all contributing in relevant ways, regardless of 2/4 being basically beginner-students. And I saw the intern not learning when shown, but learning when doing in a pairing situation.

I took a picture of our observation post-its and summarising our observations from those. Observation as it was written down is in bold.
I still have the little activity of "having a chat" with the manager with money on this. Finding (and normally paying for) the right help is so important. The value of just this day alone is significant. Having someone to turn to with the next roadblocks we imagine we have would be relevant. And like I said to the group today: I can call a day of "friend helping for free", but I really know and feel strongly about the fact that the friend should be paid. Finding the right person is the key. We did a workshop on unit tests earlier that drove us more into despair, whereas this day was a light in the tunnel.

I find the thought experiment that results from this quite intriguing. Imagine we could have hired the friend. This would have been his first day with the company. With skills of inviting people who understand the domain (I did, as a tester), and people who understand the code to go to right places quicker (the experienced developer did) he could get us together to do things we couldn't have done without him. And we were supposed to. He saved us a lot of time and effort. There's a lot of quite impressive skills in working with code with shallow knowledge of it. And having seen a bunch of developers over the years, I too can see that these skills are not commonality amongst the developers out there. I guess that sets one example to strive for on developer skills.

Some friends come with pick-up trucks that move all of the stuff in one go. With others you take a few batches. And carrying the items one by one just isn't right even if it gets the job done. I need to get better at using the assigned friends (developers) at work. Calling on personal favours works for a day. For real heavy lifting, pay for the work.

Posted by Maaret Pyhäjärvi at 10:52 PM